Whilst I was trying to wrestle myself out of the car today until I realised I needed to actually undo my seatbelt before stepping oh so elegantly onto the pavement, it struck me, the not so smalls have not written to Father Christmas.

It’s the first time, which means last year was their last time – and I didn’t know it. I didn’t realise the importance of it. I didn’t take the moment and hammer it into my brain as I watched their childhood slip through my fingers. 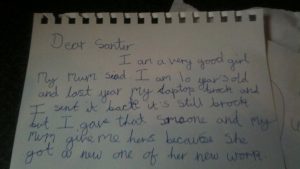 Of course the nearly 17 year old might not have taken the old Christmas letter writing to the big man all that seriously but she still did it as the 12 year old also diligently wrote his appeal regardless of any niggling doubts about the North Pole.

I also realised (by this time I had released my seat belt and was mainly eating all the chocolate coins I had hidden) that I have turned into that person that continually says…”blimey (obviously insert an appropriate swear word) hasn’t this year gone fast.” I never thought it would be true that the years would speed up, that you’d blink and another season had begun and that all of a sudden you missed the bastard Christmas school concerts and the last minute hunting of baby donkey costumes but you do and here I am with a nearly 17yo and a nearly 13yo missing the eleventy billionth performance of Rock Around the Christmas Tree. I’m even feeling a bit nostalgic about never having done ‘elf on the shelf’ – actually that’s a massive lie, I would have totally forgotten to do it and probably ruined their Christmas’ forever.

I am now that parent that sobs through “Mama Mia’s Slipping Through My Fingers” as I watch my not so smalls super charge through life. The nearly 17 year old is chomping at her independence now with two part time jobs, (part-time*) attendance at college and a partial disregard for her mum – unless, of course, she wants a lift or a sandwich making before she tries to catch the college bus.

I worry about how many “lasts” I have already completed – sadly they still expect me to cut their toe nails as I would happily never do that minging job ever again, but what are those other small things that have already happened that will never happen again – things so small they go past un-noticed until one day I’m sitting there with the stupid dog and coffee*** and wondering when was the last time I could pick my boy up.*

Every night I smother the 12 year old in kisses (he really loves it) because I know one day I’ll never kiss his elbow again or even his back…you know because when he’s 38 years old it might be a bit weird if his mum suddenly started kissing his back….Every night I tell him I have to get the kisses in and obviously (mainly because I am still stronger) I still win and we have a snuggle.

I guess this is the push and pull of parenting – your job is to push them away so they can tread their own path, create their own adventures but there is always such a pull on your heart strings and frankly a reluctance to let them go. (unless I want to go away for a weekend without them and then…well…who are they??)

So what do we do – except obviously drink a large glass of red wine and talk about the good old days wearing our rose-tinted specs – how do we cope, how do we count the lasts, how do we know when we need to stop and hammer the moment into our brains?

We just can’t. We don’t know when is the last moment of anything we hold precious…and all we can do is make the moments we have count, make every moment count. (preferably with wine).

*darling daughter may find that part-time attendance in college may come and bite her on the arse in the new year when she’s not done her course work…but what do I know from my high horse.