Our house is a cacophony of women. Loud, shouty women and on the edge of that is my dad.

My dad is a gentleman.  A gentle. man. There’s not many of them there gentle men left in the world – and often as I was growing up I didn’t see the impact or the benefit having a true gentleman in my life would bring.

Growing up I may* have not quite seen the strength in my dad, in his quietness, in his ability to keep his mouth stum when the rest of the house was up in arms – but then when he did roar, it was definitely noticed…

There was the time when I tried to smother my sister, and he actually smacked me. I wasn’t actually trying to smother her, of course, I just happened to have a pillow on her face…

His quiet, fierce loyalty, the times when he has not quite approved (and said nothing) and his beaming pride on certain moments on my life as he grabs me in a bear hug are the things I cherish today. And the personality traits that only a true gentle man can display.

My mum is my go to person…she’s the one that gets the call with me mildly hysterical because the stupid dog has eaten an easter egg – she’s the one that calms me down with dad googling the symptoms in the background and applying his science maths geek to work out the ratio of chocolate to body weight to see if the dog is gonna cork it…(the dog didn’t cork it).

My dad sends me text in proper English and always signs off ‘love dad.’  He always starts the text properly with ‘Dear Sarah’. He’s told me he can’t stand youth speak…he likes it all to be done properly…and at times this has caused much hilarity for me, mum and my sis…and he may** have been the butt of a few family jokes and jibes.

But above it all my dad has always conducted himself as a gentle man…even when he’s trying to get to grips with Call of Duty with my 11 year old. It’s something I have only realised as I have got older – and looked around and realised that gentleness and calm are fierce strengths that not many people have.

He’s picked me up year on year. Whenever we have needed a lift, wherever we were, my dad (and mum) have been there. I’m not sure I’m gonna be so good at that part of parenting for my two small things. I might just download them the Uber app.

He picked me up from the cinema when I was 14 years old and had sneaked in to watch the 18 Hellbound Hellraiser film and had mainly felt quite sick when the horror film unfolded and had to leave. Back in the day I had to find a phone box and ring home telling the rentals I didn’t feel so good and they hightailed it to pick me up. They didn’t comment on the fact I may** have been drinking some cider in Queen’s Park before seeing said horror film and this may*** have the root of my queasiness.

Fast forward ten years later and I’m drunk in Manchester with my bestie and we can’t get a taxi home, cue Dad Taxi..from Manchester to Bury.  And all those taxi trips in between; often with me being tipsy….and Dad calmly driving with no judgement.

There was the time I drove his brand new company car. He had let me drive his brand spanking new red Ford Sierra to work while he took my battered fiesta – and then I crashed it.

I knew when I rang him, he would mainly be concerned for me – and never (rarely) showed how annoyed he really was with me as he had to head into work and admit his brand new car had been smacked into the car in front by his rather irresponsible daughter.

And now he is a Granddad to three, not so small, small things. And he never says NO to them. He tries to help. In Cornwall, he goes rockpooling, he carries as much stuff off the beach as is humanely possible including the kids’ surfboards. And when he hightails it over here after work on a the odd Wednesday he’s as happy playing Call of Duty as he is watching them play cricket.

Did I mention he’s still working – at 70 something. Flying all over the world and still bringing home the bacon.

So on this day, Father’s Day, I raise a glass to my wonderful dad and thank him for consistently showing me what a gentleman is – and always should be… 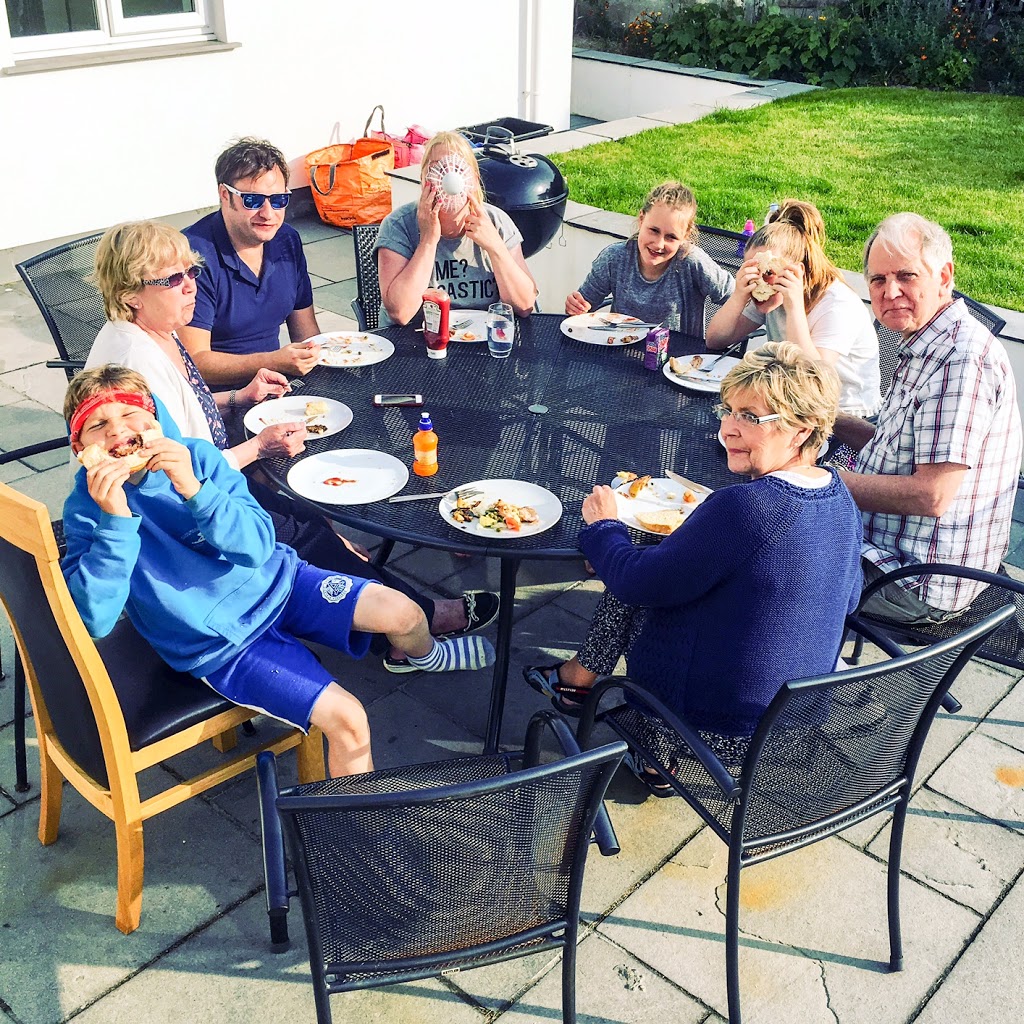 To all the dads and gentle men out there….Happy Father’s Day.

Thank you for being so feckin**** fabulous.