Single parenting in the sunshine….

Being a single parent for the past five years has thrown a number of curve balls – some that have landed loudly, repetitively bouncing in the hallway in the shape of another football and some in the shape of my head banging against a wall….

Luckily, I’m well past that first year of single parent insanity where every new challenge seems like a hurdle that grew bigger than Mount Everest every time I tried to climb it. Now it’s rare I have a mountain to climb, and the world of single parenting is really a walk in the park.*

I rarely blog about the whole single parenting schizzle because it’s mainly not about me being a single parent.

It’s just about me being a parent. And I’m single…(some of the time).

But there are times when carrying that single parent label becomes bigger than it should be – it moves from being a small identichip I happen to have to a mahoosive billboard advertising my status.

Thankfully for me this rarely happens mainly because I have a pretty fantastic group of friends but I know they still exist. And in general I’ve been misbehaving with all these friends for many years well before I was single.

In the main, I reckon I have nailed the whole single parent thing. The cellar bootcamp for the small things was one of the more successful parenting techniques I employed and copious amounts of wine have also helped the flow of the single parent journey.

And then this year…the dawn of the summer holidays. A joyous time in every (single) parent’s calendar – right up there with bank holidays and Christmas.

What to do. When. How to plan. Who with.

And then the momentous decision – to go it alone.

A holiday with the small things. Just me. And them. The three of us. One adult (debatable) and two children.

Before I could wimp out I booked it. Ready. Willing. And rather nervous.

And then we arrived. The airport negotiated perfectly. The flight a breeze. The sun shining. The apartment perfect (with the door blocked at night by two suitcases and a dressing table in case anyone tried to get in).

It was the most chilled – I would even say chill-axed if it wasn’t one of the worst words in the new dictionary of today – I have been in a long time.

Just me. And them. And 3,245 games of Uno, 2,765 games of Go Fish, 10,000 attempts to get three of us to swim across the pool whilst riding the giant inflatable crocodile (that was a good look in a bikini), four shows, three diving competitions, two doggy paddle races and one bike ride. 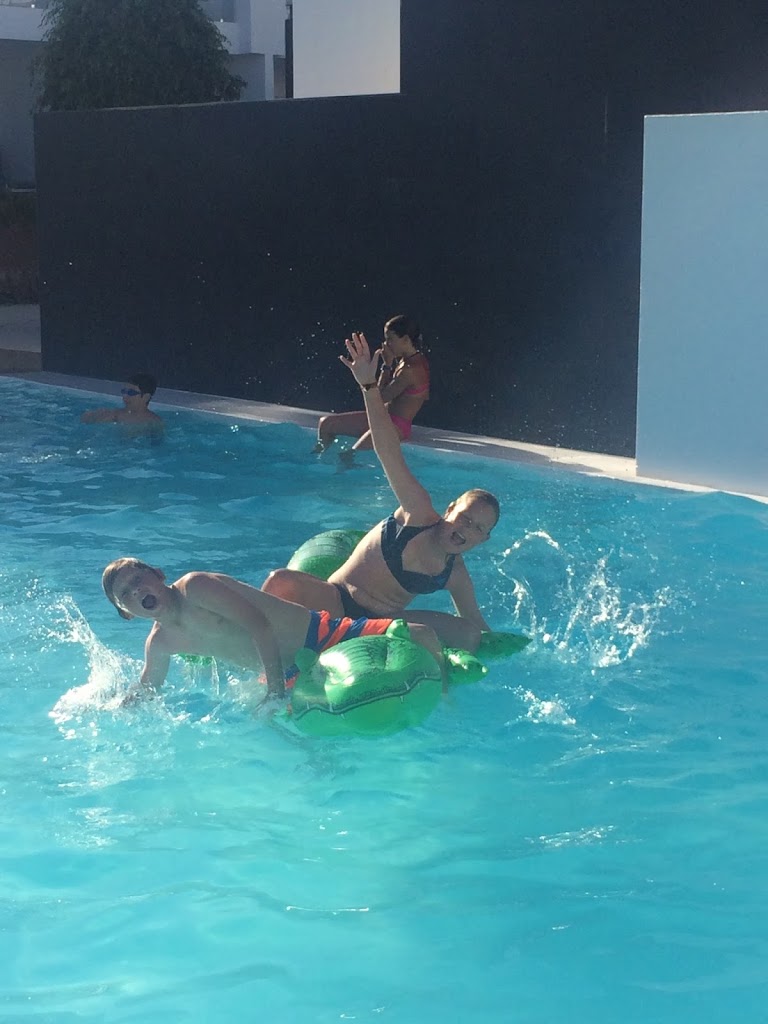 I even turned my emails off. Obviously I didn’t turn off the 24/7 support text service from friends and me mum on every given detail of the holiday. That would have been a ridiculous concept – and a step too far.

In summary – one of the most relaxing holidays ever – I even swam underwater to beat them in ALL swimming races. No prizes for second place in this family.

There were times I was conscious of the big fat single parent arrow that hovered above my head announcing my presence to all the smug married couples around me but I mainly didn’t care cos we had fun and we did what we do every time we are together and I am relaxed – we mainly laughed.  The constant (all inclusive) supply of wine obviously helped. Although disappointingly it appears that the 13 year old isn’t allowed to order me wine from the bar.

Perhaps most importantly it gave me proper time with the small things – and as it turns out they’re quite good fun to be around. Well most of the time. Except when they decided it would be a really great idea to get me with the water guns when I was particularly relaxed with a good book – then shouty mum returned.

I did it. A summer holiday with my small things and I didn’t feel that the big fat single parent arrow glowed too large above me head.

And the best bit….the small things told me it was the best holiday they had EVER been on. *Air Punch*

But for the record I never want to see another game of Uno again ever. Or Go Fish. Well maybe until next year when I’m thinking we go Greek Island hopping …


*walk in the park aided by wine