The longest day of the year…EVER

Of course I am not exaggerating.

Of course I am not being ridiculous.

And Bob the Builder appears not to appear on request. Or free.

Sometimes the whole single mum running a business thang becomes a bit overwhelming. Rarely happens but this was one of those days.

It all started with the toilet seat trauma. So the toilet seat broke, completely cracked. I hasten to add before anyone casts aspersions it was not, I repeat not my fault, but the blame can be firmly planted at the feet of the small things as they stood on it to look in the mirror while they cleaned their teeth (imagine the shouty mum outburst the morning that was discovered).

And of course nothing in this house is simple. Turns out the stupid expensive replacement toilet seat is not only stupidly expensive but also would take THREE months to arrive. Next time I shall be B&Q all the way – none of that designer Italian nonsense for me.

Turns out (after several million phone calls) it’s cheaper and way quicker to buy a new loo. New loo purchased, picked up and now in hallway waiting for a suitable Bob the Builder to come and fit.

So in between toilet trauma and toilet seat resolution with purchase of new loo was the breaking of the bed.

Cast your mind back to last weekend. Last weekend there were three of us in my bedroom, a night of fun was planned…..

STOP now with that thought……don’t be so ridiculous.

Me and two of my friends were getting ready for a night on the town sipping fizz whilst applying mascara. Three girls sit on my bed to take this photo…… 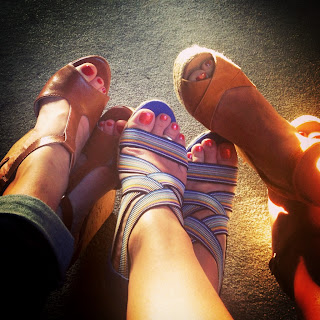 Mere seconds after the picture has been taken….

BED (from very reputable company) BREAKS. Bed which is only a year old SNAPS. Bed frame just caves in two. And I wouldn’t mind but the straw that broke the bed frame was my very teeny weeny 5ft 3 friend.(names have been removed to protect their identity).

I am now currently waiting for the bed man to come and examine the breakage and determine the future of said bed. For now I am mainly lying very still in the middle of my bed as part of it is propped up on books – books I haven’t yet read I may add.

And finally at 3pm this afternoon my (expensive) push button bin broke. That pushed all the wrong buttons and I had a small strop.* A small strop that to be fair had been building all week due to the amazing achy breaky house.

Then the small things came home from school. At this point I imagine most readers are covering their eyes thinking the smalls are going to get it from shouty mum extraordinaire. But my friends, that is not how this story ends.

7yo dispatched with his dad. 11yo with me due to concerts, leaver’s party outfit shopping and some much needed mother/daughter time.

I anticipated me mainly sulking like a petulant teenager and drinking wine while the 11yo maturely watched TV and counselled me on seeing the bigger picture.

Instead we found gift cards for two shops and we went a spending. We then popped up to see my mum (who’s birthday it is today). We spent a delightful few hours just mooching in each others company where I thought ‘Wow it’s quite cool having an 11yo daughter’.

We’ve spent quite a bit of time in the car and then I decreed it was only right and fair that I began her education into 90s music.

It started with this classic

The jaw-dropping embarrassment of my 11yo daughter combined with the loudness of me singling along to Dub Be Good to Me (complete with rapping) finally lifted my patheticness. (new word; feel free to use in times of patheticness)

Thus I give to you my lesson in life. (you can thank me later)

When everything breaks, when Bob the Builder can’t be found, when the lottery hasn’t been won and when the push button bin does not push the right buttons anymore play some funky music and sing loudly preferably in the presence of a small child.

It also helps if you combine the loud music and bad singing by winding the windows down and doing some crazy mum car dancing whilst driving along.

It’s times like these when it’s worth being a parent.

When being a parent and embarrassing your small child makes everything better.