Where do all the odd socks go?


This was after a great day in the balmy sunshine which involved a netball game (the nearly ten year old scored six goals), a post netball celebration in an ice cream parlour where the six year old conned me out of another scoop of gubblebum (his words) ice cream, followed by a barbecue at my sister in law’s where the sun shone and the small things played croquet. Well when I say played croquet, it was no Alice in Wonderland scene, more two kids slamming a ball with some wooden sticks shouting ‘get in.’


Me and the small things then came home and I decided I had to dust my radiators..and there I found an odd sock.


And then it came to me, like a bolt out of the blue and I haven’t been able to stop thinking about it ever since.


“What has happened to all my socks?” No matter what happens, no matter how often I try and pair the socks, every single sock in my house ends up odd.


I have tried the following solutions to beat the odd sock shocker.


1. Put the socks into the washing into pairs
2. Pair the socks as soon as they come out of the washing machine and dry them together
3. Only buy the same colour of socks


The socks go into washing into pairs. They come out odd.


The socks get paired as soon as they come out of the washing machine, there is always one or two left over. AND THEY DON’T MATCH.


I buy socks the same make, match and colour and still I have a batch of odd socks which cannot be paired.


There is a new creature of cryptozoology in town.


Sod the Loch Ness Monster, stuff the Yeti, there is a Sock Monster and it lives and it breathes in my house. 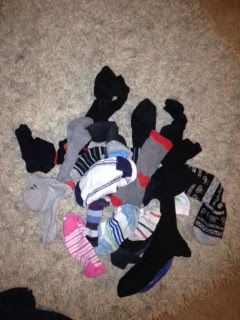 Tell me you haven’t thought it. Tell me you don’t wonder what has happened to your matching pairs.


Someone…or even something is stealing our socks.


There is a conspiracy theory in this. Maybe.

4 thoughts on “Where do all the odd socks go?”