The Power of a Letter

After a lovely ramble in the Ribble Valley today (walk followed by pub), I popped into Mum’s on the way back for a cup of coffee. I found her buried under a stack of letters. She wasn’t literally buried you understand – that would have been quite traumatic.

The letters were letters I had written to her over the years when I had moved away from home – mainly letters from university.

Letters written with love when I was missing my mum.
Letters where I was asking for advice.
Letters where I was bringing her up to date on my love life (I think I may have shared way too much with her).
Letters asking for money – there were a lot of these letters.
And the cringeworthy letter she was never meant to see that started; ‘Dear God or whoever is out there’ (and now I know mum was rooting in my room).

I have spent the last hour reminiscing with mum, remembering how I felt at university and laughing at the fact that I promised would pay her back all the cash she had spent on me with interest (rent was £21/week) when I was rich and famous (she’s still waiting). I also apologised for the terrible angst-ridden 7 page ‘Dear God’ letter.

I had forgotten about the power of writing a letter. Now as a mum, I also know how much these letters must have meant to mum – even the ones that asked for emergency food parcels and told her I was spending her cash getting drunk in the student union. 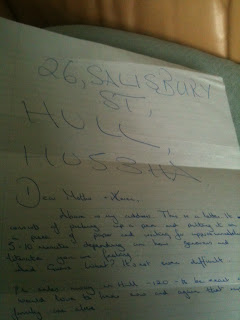 Then there was this letter that reminded mum (and my sis) of my address and demanded a letter in return.

In an era when we text rather than call, and email rather than find a pen (usually found under the microwave) and put said pen to work on a piece of paper; I am already sad that my small things may never bother to write me a letter when they are away from home; we will skype, facetime or email.

So I’m off to write a letter to my mum, asking her for a tenner and promising to pay her back when I’m rich and famous.

I dare you, no I double-dare you to go and find a pen and write a letter right now and don’t forget to post it (unless it’s a ‘Dear God or whoever is out there’ letter and then I highly recommend once you have written it you then burn it).